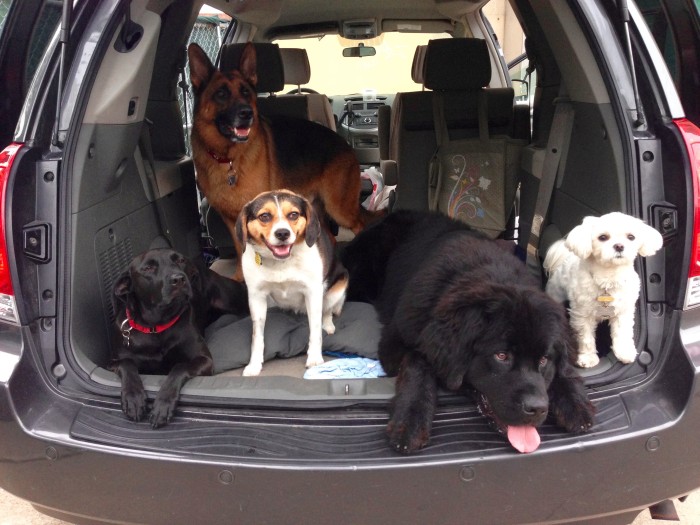 When people are thinking about becoming dog owners, sometimes they wonder if they should adopt a rescue dog from a shelter or get a purebred puppy from a responsible breeder.

Prospective owners often ask my advice as to what kind of dog they should get because they don’t know what’s the best dog for them. My response is, “What are the things you want from a dog? Do you have a special look you like? Or do you have a special memory of a dog that you had as a child?” And if they tell me how they always like a particular breed, such as a Golden Retriever, then I tell them to get a Golden Retriever. It’s that simple. Get the dog you want. I never steer people toward a particular breed or tell them to adopt a rescue dog. I believe getting a dog is a very personal choice.

I don’t think people should feel guilty about getting a purebred even though there are so many dogs waiting to be adopted in shelters. And, I have no problem with people wanting to adopt a rescue dog. But my feeling is if you are going to rescue a dog, then really rescue it. People who want to adopt a shelter dog need to keep in mind that there are usually more issues that need to be addressed. You will have to be very dedicated in teaching a shelter dog social skills because, in most cases, the breeder or the previous owner wasn’t giving the dog enough social interaction with people. There is also the unknown history of a rescue dog. Was it abused by a previous owner? Was the dog nurtured by the mother? What was the environment of the past owner?

Many people are motivated to adopt a dog from a shelter because they want to save a dog. I think that’s a wonderful reason, but having an altruistic motive isn’t enough. It doesn’t get you through the hard times. Sometimes people who adopt shelter dogs fail to understand the challenges. There are a number of cases where they become quickly frustrated with the dog’s behavior and return the dog to the shelter.

Keep in mind that the social and intellectual growth of all dogs – rescue or purebred — takes shape by the fourth month. Because you won’t have the history as to how a rescue dog’s personality was shaped during that fourth month, you are going to have to go that extra mile in putting the time into training and have plenty of patience as well.

On the other hand, buying a purebred isn’t a guarantee that you are getting the perfect dog either. When people tell me that they are planning to buy a purebred puppy, I always advise them not to get over-eager with the thought of buying it right away when they visit the breeder. In fact, I advise them that when they first visit the breeder, they should see the mother of the litter before looking at the puppies. They should make it a point to interact with the mother and if they don’t like the mother, then they shouldn’t waste their time looking at the puppies. The reason is that the mother controls 70% of her puppies’ environment in the whelping box. The mother also controls the environment by putting her puppies on a schedule as to when they are allowed to eat. She is the one who sets the housebreaking schedule. If she is anxious or nervous, that is often passed on to the puppies because she is living in a small area with them. The other 30% is controlled by the outside environment — how the puppies were raised by the breeder. It is the responsibility of the breeder to make sure the puppies are interacting with other people, including children. Also a good breeder takes care of the mother’s well being by making sure she is receiving the proper nutrients, making sure her milk doesn’t dry up, and that the environment is conducive for her. Unfortunately for most puppies in a shelter, they don’t have a good start in life — they could have been whelped behind a garbage can or raised in a puppy mill. Their environment shapes their personalities. That is one of the advantages of getting a purebred puppy from a good breeder.

I’m not saying a rescue puppy can’t be a loving pet. There are many owners who have a great bond with the dog they adopted. But remember that if you become an owner of a rescue dog, you need to meet the challenge of providing that dog a lot of training, social interaction, and also a healthy diet.

Sometimes, people give me a negative attitude when I tell them that I occasionally breed Weimaraners. They are of the opinion that there are so many dogs that need to be adopted, so why am I breeding more puppies? I don’t feel the need to apologize or feel defensive that I’m doing something wrong. I think there is always a need for good puppies on this planet. A good breeder provides a service for people by breeding healthy, socialized puppies. Before I breed my dog, I already have a waiting list of owners for my puppies.

I know the staff at dog shelters work hard in trying to give as much personal attention as they can to the dogs that are up for adoption. I respect their effort. But there is big difference on the care a purebred puppy receives from a good breeder compared to what a rescue dog receives from a shelter. Most dog shelters are understaffed with the number of dogs they receive and they also must depend on a rotating staff of volunteers. Despite their best efforts, they can’t give that same personal attention that a good breeder can give. Please don’t misunderstand me, I applaud their dedication and hard work. It tugs at my heartstrings that these dogs have to be in a shelter with their fate unknown.

So whether you plan on adopting a rescue dog or buying a purebred, be prepared to bring out the best in them. Provide them with spiritual growth by teaching them how to handle stress in any environment. Teach them to respect people and other dogs. Provide them with uplifting moments that will make their confidence soar. Take the time to develop a rich bond with your dog. Hopefully, you will have a lifetime of wonderful memories.

Email me your story. I’d love to hear from you!